How To Filter Your Tweets To Facebook Using WordPress, Twools & IFTTT

You are here:
Wordpress 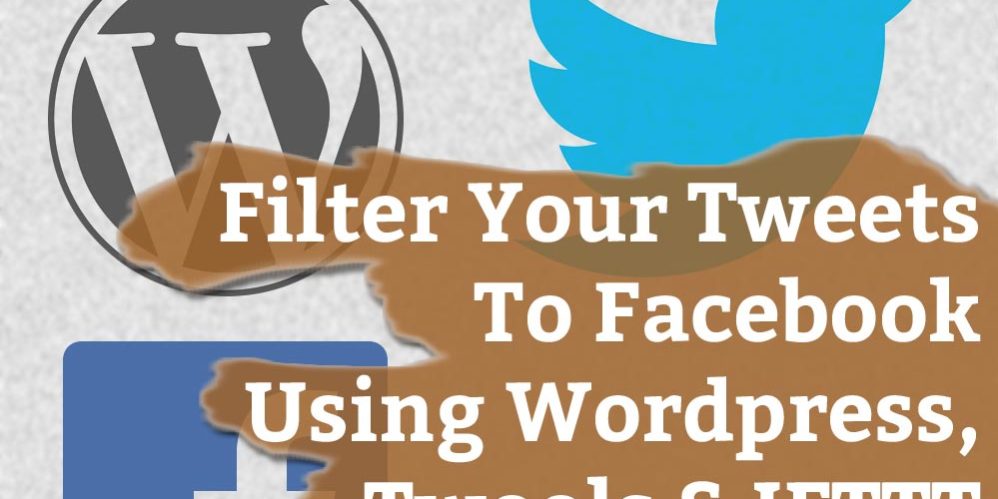 Awhile back I received a complaint from my sister-in-law about posting Instagram photos to Facebook. Now I have been for years now syndicating my Twitter feed to Facebook, which many people may very well hate. I know personally I derive more value sharing to Facebook and interacting with people than I would if I simply didn’t share to Facebook. If I didn’t share there, I simply wouldn’t be a Facebook user, so this is the compromise I have to strike as an ardent Twitter user.

The root of my SILs complaint was that she had to go to Instagram to see my photo anytime I posted, whereas anyone else who posted directly to Facebook from Instagram gets a nice big photo that people can comment on. If I post direct to Facebook from Instagram it would end up showing up twice, once for the Facebook share and a second time for when it gets shared to Twitter, then syndicated to Facebook. There was no way to filter my feed so as to eliminate the Twitter duplicate from being posted to Facebook. While there used to be Facebook apps that allowed you to filter your posts to a point, those have gone by the wayside once Twitter and Facebook offered native integration. There is an app called Selective Tweets on Facebook that allows you to use a #fb hashtag and only import those tagged posts, but now I’m cluttering my posts with extraneous Facebook only data, which is now bringing the problem of platform cruft to Twitter instead of Facebook. I wanted something that was a lot smarter and would allow me to filter things based on my defined rules.

This used to be something rather trivial to sort out, but since Twitter phased out RSS support on their platform awhile back. Bummer. So now we’ve got to figure out how to generate an RSS feed from Twitter. This is where I happened up on a WordPress plugin called Twools. Basically what Twools allows you to do is generate your own custom filtered RSS feed, which is exactly what we’re trying to achieve here. Twools is also available as a standalone app that will work on a PHP enabled server, but I’m going to outline the WordPress method of setting things up.

Once I got this setup working I realized I had a need for a second recipe to be created, one for when I posted something that wasn’t a link and had no @ symbols, so I created a second RSS feed for those instances and created a second recipe in IFTTT. That recipe was different in that instead of using Create Link Post I used Create A Status Message. If I didn’t make this second feed I found that Facebook would always want to create a post with a link, which would point back to my original Tweet on Twitter which wasn’t ideal, so that solved it.One thing I thought I should mention is that since you’re running your tweets through essentially 2 different services before posting to Facebook there is a delay in when your tweet will be posted. In my experience so far it can be as little as a couple of minutes to up to about half an hour, which to me isn’t a big deal.While it may not be the most straightforward way of achieving the goal I have found that it is by far the best way of controlling the flow of data from Twitter to Facebook. I find I’m shocked that nobody has built a Facebook app that brings more robust filtering of Twitter, but until that happens with is the next best thing.